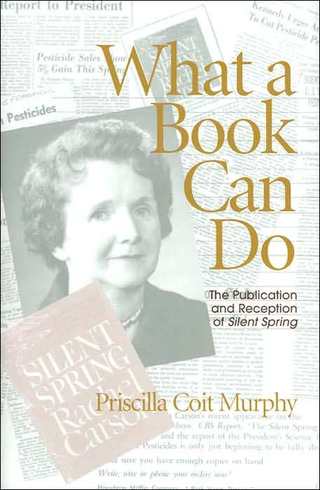 What a Book Can Do: The Publication and Reception of Silent Spring

“This is the story of a news-making bestseller about the unlikely topic of chemical pesticides.”

That book was Rachel Carson’s 1962 bestseller, Silent Spring, published by Houghton Mifflin and serialized in The New Yorker.

Priscilla Murphy describes how Silent Spring put the threat of pesticide abuse into American public view. The story begins with backstage challenges to the book and Carson's message, sparking controversy well before official publication. Soon the argument raged publicly throughout the media - in editorials, opinion columns, news articles and broadcasts, book reviews, and letters to the editor. From garden club meetings to the floor of Congress, Silent Spring drew its advocates and its detractors into sometimes acrimonious debate, one not only covered by the media but engaging the media as participants themselves. The controversy grew to a climax in spring of 1963, when CBS Reports devoted an entire broadcast to it and Rachel Carson was called to two Capitol Hill hearings on pesticide policy.

Remarkable as it is that one lone author was able to set forth her message and manage to reach audiences at every level - from neighborhood to state house to White House - it is even more remarkable that she was able to do so by mean of the medium many now claim is dying. Long after Carson’s early death in 1964, Silent Spring remains an abiding landmark in both book and environmental history. Murphy demonstrates that it also provides a perfect case study of books’ unique ability to enable a single citizen to place a matter of public importance into the forums of debate. In the process, she addresses a host of broader questions about the place of books in American culture, past, present, and future.

What a Book Can Do: The Publication and Reception of Silent Spring
“Highly readable and often illuminating history of the writing and aftermath of Rachel Carson's masterpiece”
"Books and the Media: The Silent Spring Debate"
Chapter on books and the media in History of the Book in America Vol. 5
“Books Are Dead, Long Live Books”
Historical survey of predictions about the end of books